One of my favorite lines from the Roast of Larry the Cable Guy came from Greg Giraldo when he asked “How the #*^% are you so popular???” There are a lot of folks out there asking the same thing about Twitter. Especially after, as one blogger put it, “Twitter’s Spectacularly Awful 24 Hours.”

You can read about all the screw-ups that Twitter’s executives made yesterday, and their apology for all the mess in any of the other of thousand’s of blogs talking about it today. I wanted to touch on why it is that:
1) Why people care so much about the “TWawful TWednsday” and
2) Why it is that 99.44% of the users of the service will forgive and forget. 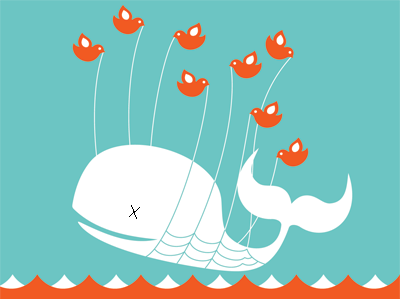 Why Do We Care??
Let’s face it… Twitter is run like it is a couple of kids in the basement of their parent’s house with a computer and a programming manual. But, in a way, that is one of the things that people love about it. It isn’t flashy, it isn’t complicated, and in fact, it may be one of the simplest forms of communication in the history of modern communication tools. When I started using Twitter, I said to a group of librarians in Dallas that “Twitter is the dumbest thing I’ve ever become totally dependent upon.” And that is still true today. Everyone is Tweeting about how Twitter is run so poorly, and how terrible the service is…. just look at the #TwitterFail tweets. I can only imagine that there were some people just frustrated yesterday that they had to wait until Twitter’s mid-day service shutdown was over before they could tweet about it.
Why Will We Forgive?
Twitter has built up some “Political Capital” with its users and it is going to spend some of it over the next couple of days to make up for yesterday. Evan and Biz have done a great job of embedding their personalities into Twitter. And, both have made hundreds of thousands of virtual friends. And, we’re more willing to forgive our friends of their faults than we would be of a “business.” So, just like Larry the Cable Guy movies (Delta Farce, Witless Protection), they make some pretty awful decisions (i.e., mid-day service shutdown, removal of @replies without telling anyone), yet the fan base still loves ’em.
What Can We Learn From Evan & Biz??
First of all, just because you are really really good at what you do, whether it be creating Internet communication tools, or practicing law… doesn’t mean you are automatically good at running the business. It’s okay to put your personal brand on your product (in fact, it is encouraged), but when it comes to handling complex business issues you need to find some experts in that area that can work behind the scenes. If Evan and Biz can’t do that, then it is really time to start thinking of selling off Twitter and start working on creating their next great invention.
“Political Capital” is a good thing to have, and a terrible thing to waste on bad decisions. Twitter has build a loyal customer base (excluding the post-Oprah crowd that is now disappearing), and this base is pretty forgiving. But, try not to be careless or take for granted that this base is always forgiving. You screw up enough where you’ve tarnished your image, then that’s when some competitor swoops in and takes advantage of your mistakes and starts bleeding your customers away.
The Key Takeaway — “Political Capital” takes a long time to build up, and a short time to destroy. So, don’t waste it!!